The CFA family is just that – a family. Along with the celebration of arrivals, we also mourn the loss of our departed comrades. This page is set aside to both remember and commemorate the service of those we have served along side.

The firemans prayer: “We remember them as we knew them, serving in our ranks, answering many  calls, leaving comfort, security and safety to render service to all.

Now they have answered their last call, and claims the promise of Jesus Christ that death is but the opening of another door.

There’s a wideness in God’s mercy, Like the wideness of the sea, there’s a kindness in His Justice, Which is more than liberty.

For the Love of God is broader than the measure of one’s mind; and the heart of the Eternal is most wonderfully kind!

From the dying embers of our colleague’s life we shall kindle a  new flame and pass it on from member to member, as a symbol that the  life we honour will go on in service through those who this day are  humbled before eternity and dedicated to help our community through  service with the Country Fire Authority.”

You may be gone but you are not forgotten.

Lost in the line of duty 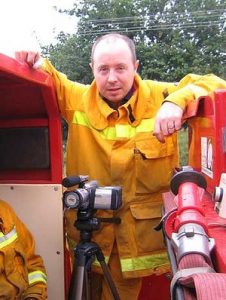 His brother-in-law, Peter Morris, summed it up for us all:

“What 48-year-old volunteer goes out, who is pretty healthy, to help  fight a fire which he’s done hundreds of times before and doesn’t come  home under these circumstances? To say we are in shock is an  understatement. We can’t believe what has happened.”

The Ash Wednesday bushfires prompted Mr Harry to join the brigade on  March 21, 1983.

In 2002, Mr  Harry took on the roles of brigade and group communications officer and  took control of social media and website development.

In July  2010, he was elected third lieutenant of the Gisborne brigade and two  years later was promoted to second lieutenant. He stood down as group  communications officer after 10 years but still juggled his time to go  to training.

The veteran CFA member of almost 30 years died on the fire ground of a heart attack after battling a raging house fire in Gisborne on December 30.

Approaching life with a wide grin and a cheekily determined attitude, Peter was taken as a role model by many. He is deeply and sadly missed.

More information on our site is here

This article describes the event that Peter’s funeral generated. Never one to do things by half.

Some of Peter’s video work can be seen here and here, marking his dedication and determination to serve his community in the best way that he could.

The CFA website holds a concise summary of his fire fighting career, from keen contributor to being remembered at http://www.cfa.vic.gov.au/search-results/?q=peter%20harry

Final words are from Group Officer Ian Hay “Peter would not have been such a big part of the brigade and group without the support of his family, and CFA would like to take this opportunity to thank Leanne and the girls for their generosity in allowing us to be part of Peter’s life. I close with a quote from a Facebook post. It comes from a firefighter in Geelong and reads in part: ‘Rest peacefully – you have done your duty.  We will take over from here.”

Peter was laid to rest 9th of January 2013 in Gisborne Cemetery with full fire service honours. He leaves behind wife Leanne and two teenage daughters – Tegan, 16, and Alyssa, 19.