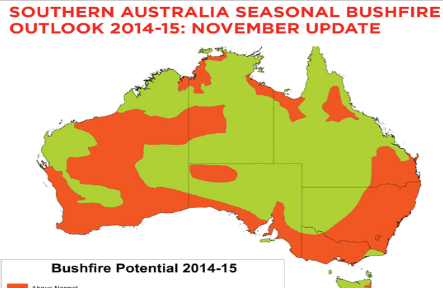 Across south eastern Australia, spring has been unseasonably dry and with the expectation of a hot and dry summer the bushfire seasonal outlook for 2014-15 has been re-examined for Victoria, South Australia and Tasmania.

This has resulted in the Bushfire and Natural Hazards CRC issuing an update to the Southern Australia Seasonal Bushfire Outlook. View the new Outlook on the CRC’s website.

The significant change in this Outlook is that more parts of south eastern Australia are now expected to experience above normal fire conditions.

In Victoria, the outlook as changed to a potentially major fire season.

Longer term rainfall deficits have emerged across much of the state, including key areas along the Great Dividing Range. Critical shorter term deficits in coastal and southern Victoria coincide with areas of tall forest with no recent history of fire. Critical deficits also coincide with vulnerable areas in the Great Dividing Range where forests have been killed by fire in the past ten years.

Read the full outlook at www.bnhcrc.com.au