After a long and busy fire season members allowed themselves to let their hair down and enjoy the night with a “Christmas In July” theme including a traditional Christmas dinner.

During the evening a number of awards were presented to members in recognition of their achievements throughout the year as well as CFA service awards.

The Rookie Fire Fighter of the Year was awarded to Cameron Stewart.   Cameron who has been with the brigade for less than 2 years was delighted in accepting the award for his commitment to fire brigade activities.

The Fire Fighter of the Year was awarded to Allison Pulbrook.   Allison started with the Brigade as a junior firefighter and has progressed through to the senior ranks and is in the midst of Respond to Urban training.  During the past fire season Allison deployed on 6 strike teams along with continuing her involvement with other Brigade activities including being a Junior Brigade leader all whilst balancing full time University studies in Electrical Engineering. Allison was unable to attend the function. She will be presented with the award at the next Brigade meeting.

The Above & Beyond award is normally presented to an individual member but this year the Brigade Management Team decided that in the light of the outstanding performance by the entire Brigade at the February 9th fires and the subsequent weeks thereafter the award should be made to the Brigade as a whole.  Captain Strang said he was immensely proud of the dedication and level of professionalism shown by all members both operationally and logistically, stating it would be unfair to single out any individual member when the entire Brigade performed “Above & Beyond” expectations during that period.

There were another three service medals to be awarded but the recipients; Monica Gibbs (10 years), John Theel (15 years) and Ashley Williams (25 years)  were unable to attend and will therefore receive their medals at a Brigade meeting at a later date.

In Tom Ritchie’s acceptance speech he paid special tribute to his wife Mary and children Janet, Leanne, James and Katherine stating it is impossible to perform this role over many years without the unconditional love and support of family.

Fire Fighter Ritchie first joined the Gisborne Fire Brigade in 1962 as a Reserve Fire Fighter before moving up the ranks to what was then known as an Active Fire Fighter eventually holding the rank of 2nd Lieutenant in 1973.

During his 50 years of service Tom actively fought fires including tours of duty at Lithgow and Colo Heights in NSW, and the Brisbane Ranges, Anakie and numerous others in Victoria.   The devastating fires of “Ash Wednesday” in 1983 and then the 2009 “Black Saturday” fires counted as the worst he has ever encountered.

Tom now has the honor of being the second longest serving member of the Gisborne Fire Brigade and believes he still has a few good years yet to offer. 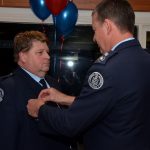 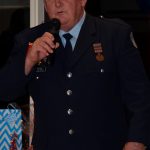 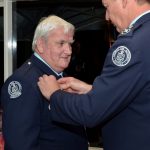 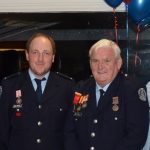